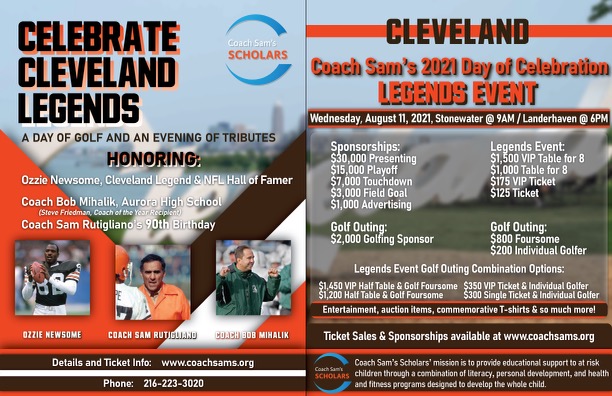 A Day of Golf and an Evening of Tributes Honoring: Ozzie Newsome, Coach Bob Mihalik and Coach Sam Rutigliano

This day of celebration will tee off with our legends at StoneWater Golf Club in Highland Heights. This year’s golf outing will include golfer-exclusive auction items, various golf contests, and a delicious luncheon.

From there guests will head to Landerhaven, in Mayfield Heights for the Legends Event. This year’s “The Wizard of Oz” theme is sure to “WOW” with delicious food, musical performances, networking opportunities, raffle baskets, and a silent auction. Proceeds from all sales, auctions, and raffles will support the outreach efforts of Coach Sam’s Scholars.

Ozzie Newsome Jr. played for the Cleveland Browns from 1978-1990 as a tight end and served as an executive for the Browns from 1991-1995. He was the general manager of the Baltimore Ravens from 1996-2018. He has been inducted into both the College Football Hall of Fame and the Pro Football Hall of Fame. Coach Sam’s Scholars is proud to celebrate Ozzie Newsome as this year’s 2021 Coach Sam’s Scholars’ Legend.

In 2020 Coach Bob Mihalik finished his 20th season with the Aurora Greenman with a record of 6-3. He won the Division 3 State Title in 2008 and has made five, Final Four Appearances in the state tournament. Coach Sam’s Scholars is proud to celebrate Coach Bob Mihalik as this year’s 2021 Steve Freidman Coach of the Year.

Coach Sam’s Scholars’ mission is to provide intensive literacy intervention integrated with health and fitness and personal development through after-school programming in at-risk communities in Cleveland. Now more than ever we must continue to support our inner-city schools. Since 2009, Coach Sam’s Scholars has been successful in empowering second and third graders to improved academic performances and a brighter future.

Please visit www.coachsams.org to purchase tickets and golf packages. VIP tables seat eight and are $1,500, and VIP tickets are $175. Standard tables seat eight and are $1,000, and general admission tickets are $125. A golf foursome is $800, with individual golfers at $200. Sponsorships, advertisements, and combination packages are also available for the event. See website coachsams.org for details.

Coach Sam’s Scholars is a 501c3 non-profit charitable foundation (Federal tax ID 01-0927220); a portion or all your contribution is tax deductible; please see your tax advisor for details.

The vision of Coach Sam’s Scholars is that all educationally at-risk youth will succeed. Our mission is to integrate literacy, personal development, health & fitness to develop the whole child. 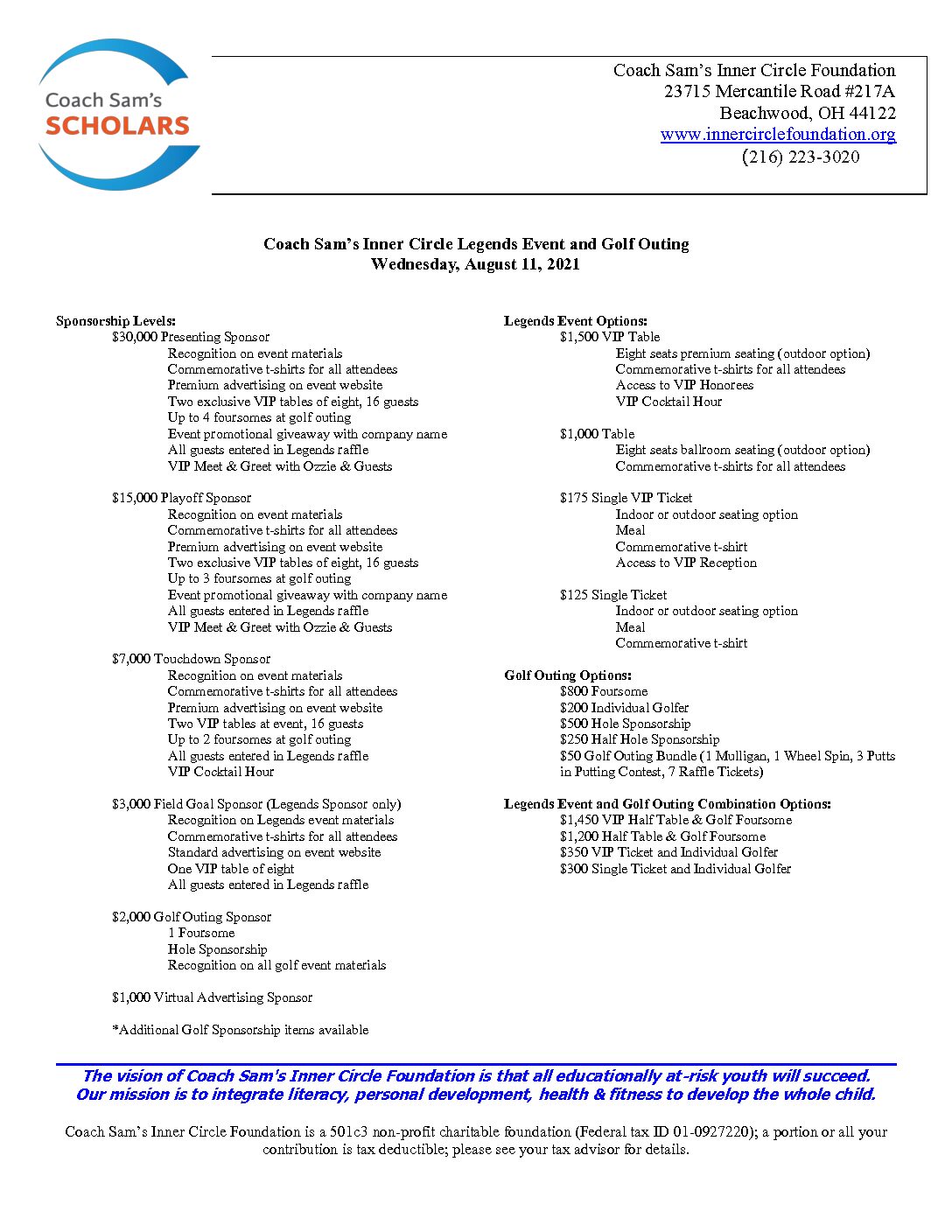